Please click below to begin the required criminal record check. The process is completely free and should take no more than 5 minutes to complete.

Please enter the following as the requested code on the CRIMINAL RECORD CHECK below: 2AUSNM5LLX
You will need to have your BC Services card available to complete the check.
Criminal REcord Check
DELVIEW RECOMMENDATIONS FOR COACHING
All principles are derived from Motor Learning research

PRINCIPLE #1 - Practice conditions should be as close to game as possible
The more closely aligned the tasks in practice are to those performed in a game, the higher the amount of learned behaviour transfers. Think of how many high school students can easily perform a basketball lay-up when they stand in a line, take 2 steps, and face no defenders. Now think of how many of those same students are incapable of performing that same lay-up still effectively in a game. By practicing in ways that do not replicate the game experience, athletes do not develop game skills.

PRINCIPLE #2 - Practices should include variability more than repetition
With the exception of beginner athletes, athletic performance is improved through experiencing random situations. Return to the example of the basketball lay-up lines. While in line, the athletes have no decisions to make, no environmental cues to read, and no question about what skill they will perform. This situation will almost never happen in a game. Athletes are less effective at making game-time skill execution which involves decision making when they have not experienced those situations in practice. Novice, or beginner athletes, are the only situations where focused, repetitive skill execution is beneficial. Beginners must first demonstrate an understanding of the basic skill execution before they can fully benefit from experiencing the skill in a random environment. An example of teaching lay-ups in a random environment may include a shooter receiving a pass from a defender in different places on the court and then trying to complete a lay-up against that defender. The defender will react differently to the shooter's attack and this will alter the skill execution of the shooter.

PRINCIPLE #3 - The type of feedback is determined by the level of athlete
One of the most important methods a coach has of improving their athletes is through their feedback. There are 2 major categories of feedback: Positive feedback and Negative feedback. Positive feedback is when you comment on the proper execution of a skill; such as, 'You had a strong 2-foot plant on that spike approach'. This feedback helps the athlete understand exactly what they have been successful in and increases feelings of confidence. Negative feedback is when you comment on the areas of skill execution which can be improved; such as, 'You should add a third step on that spike approach'. This feedback helps advanced athletes refine their performance once they have a firm sense of ability. **Remember that an advanced athlete may still be a beginner in a specific skill and should be given the appropriate feedback style**

PRINCIPLE #4 - Frequency of feedback is determined by the level of athlete
Athletes have different levels of reception to feedback depending on their ability to deal with stimulus. As athletes become more skilled in their execution, they become more refined in the stimulus they focus on. This allows more advanced athletes the ability to process more feedback, and research indicates that limited, specific feedback which is given frequently will have a greater impact on performance than sporadic feedback for advanced athletes. Novice, or beginner, athletes have not developed their ability to efficiently identify important stimulus and thus, should be given limited, specific feedback less frequently. It is recommended to allow beginner athletes 3 - 4 repetitions between instances of feedback so that they can process properly.

PRINCIPLE #5 - Skill development is specific to the skill being focused on
​             Running in a straight line is not a good predictor to how someone will run backwards or when side-shuffling. Practices and practice activities should be as similar to those required in the game as possible. General sports skills such as agility, power, speed cannot be developed universally and are specific to the required movement. Even using different weighted sports implements (heavier balls, bats, racquets, etc...) do not clearly translate to improved sport performance as the muscle recruitment changes.

PRINCIPLE #6 - Distributed practice is generally better for skill/learning retention than Massed practice
Distributed practice is when a skill/drill/concept/game is broken into small chunks of time over an entire practice. When learning the skill of a soccer throw-in, practicing the the skill in 3 minute periods 4 times over the during of a practice gives the athletes 12 minutes of practice with the skill in a manner that better retains their attention, allows for mental refocusing between instances due to other skills being performed between throw-ins, and is a better simulation of game-like situations than doing a solid 12 minute practice of the throw-in skill. Also, by allowing for more rest between execution of the skill(s), the risk of injury is reduced. Fewer repetitions will be completed using a distributed practice, but the quality of the repetitions, and the transfer of skill learning to games will be higher. Massed practice is when long periods of time are dedicated to many repetitions of the same skill/drill/concept/game and is linked with less attention to performance, increased instances of poor performance due to fatigue, increased risk of injury due to fatigue, and lower retention. When the skill or activity is not fatiguing, or when a high number of repetitions is the only goal, massed practice can be a useful structure to use. 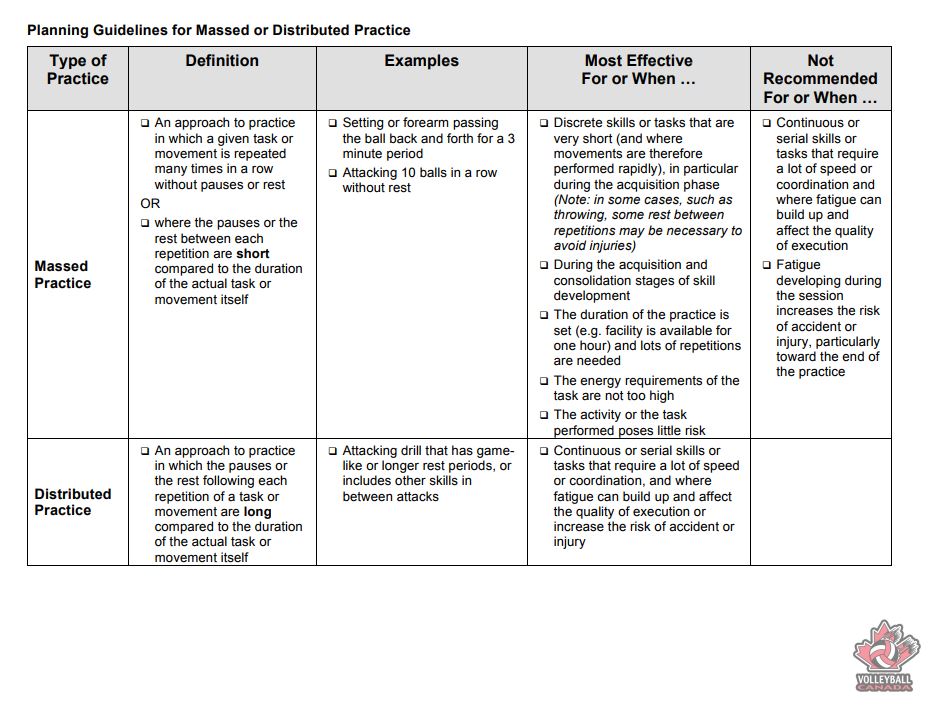